How to Watermark an Image 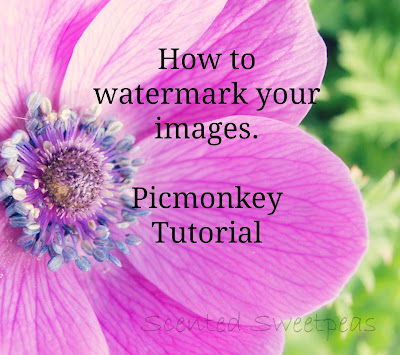 Hello everyone, I thought I would do a little tutorial on how to Watermark your images using Picmonkey .  So what is a Watermark??  A Watermark is when you add either your page name or your own name over an image and then fade it so the image can still be seen through the text (see the words Scented Sweetpeas on the above image to see an example).

I know a lot of facebook page owners and blog authors have had issues with people taking their images and using them as their own.  This is really upsetting if you have taken the time to take a photo and edit it only to find someone just takes it as their own :-(

Here an easy step you can follow to help protect your images:

Firstly go to www.picmonkey.com - this webside is great for editing photos in lots of ways.


Click edit a photo – this will open your computer files. 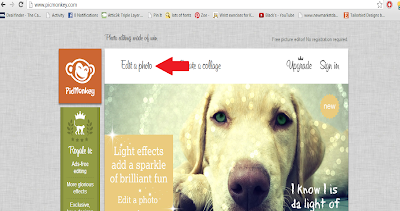 Pick a photo and double click it to upload.

Edit the photo as you wish - there are loads of wonderful photo editing techniques on this site so have fun !

Click the P on the right hand side tool bar 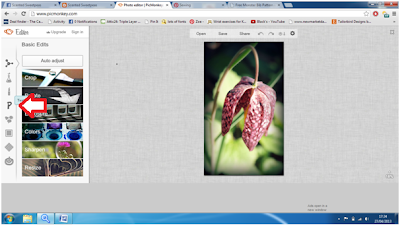 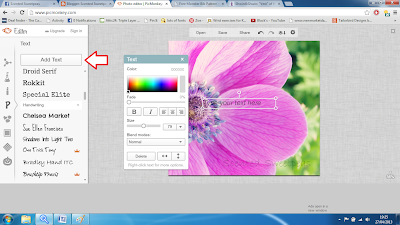 Type your page name or your name in the text box that appears on the screen which says 'Type your text here'.

Now move the fade button along (this is just below the text colour choice) to fade the word until you are happy with it.  You can also move your text by just clicking on it so it is shown in a box and then drag it to where you want it.

Now click save and save the photo back to your computer.  Remember this will replace your original photo so if you want to keep the original add something like a .1 after the photo name so it is saved as a new file.

I hope you find this useful, feel free to pin this or share it.  x

Posted by Scented Sweetpeas at 20:04 3 comments: 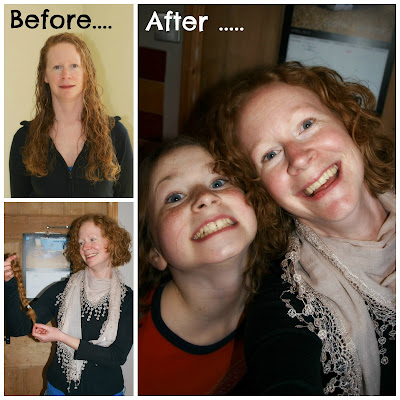 Hello everyone, wow where does the time go, it seems I only get to post a blog once a month at the moment :-(  I miss it here in bloggy land :-(

I thought I would log in and update you on our Art from the Heart Auction event that took place on my facebook page a few weeks back.  Well we raised over £1090 in the end and I then organised to have my hair cut short in the Easter half term, goodness was I nervous!  I don't really like having my hair cut at the best of times but when my friend (the lovely Amy) said she could get 11 inches off my hair for the charity I felt rather sick.

I kept the piggy tail for a while as my Mum as on holiday and I wanted to show her what I had had cut off and then I posted it off a week or so later. 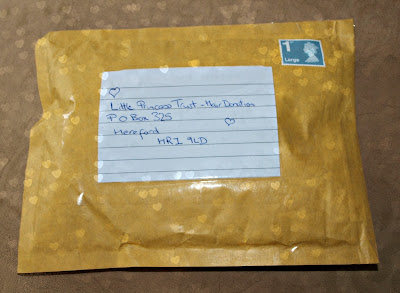 I hope they can use it as when I went to pop it in a clear packet (as they request on the site) the top hairband came off and the hair came undone so I had to try my best to re plait it.  I was in a cold sweat trying to do that thinking that maybe after all that growing it may not be able to be used :-(  Lots of lovely likers on my facebook page made me feel better saying that they usually make wigs a few strands at a time so I am hoping they can use it. 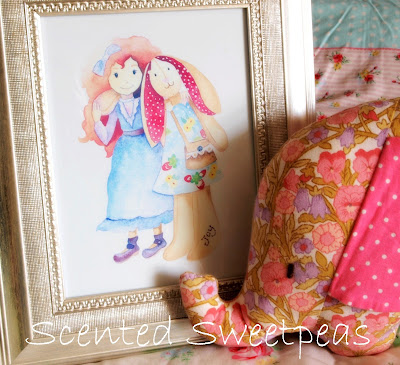 Not only was it fantastic to raise so much money for that fab charity and raise its profile a bit but it meant I got to meet lots of lovely, kind hearted, creative souls.  A little while after my cut a new creative friend called Corrine messaged me to say she has left a little something for me at my friends craft shop.  I popped in to collect it and wrapped in some gorgeous fabric and then a layer of lovely tissue paper was this wonderful watercolour of me and the bunny Joy which I made for the auction.  I actually gasped when I saw it, it is so gorgeous and really is my style ... thanks again Corrine! 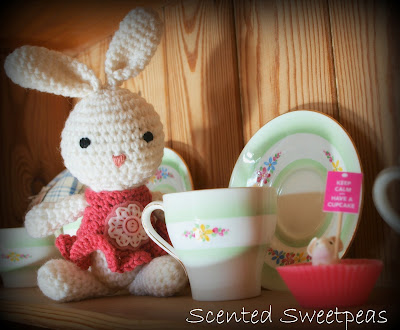 Another lovely lady called Julie from Seven Stars made a crochet bunny for the auction and offered to send me one - I offered to pay but she wouldn't let me.  This cute little bunny, now named Rosie by little Sweetpea, is sitting on my dresser.  All of the artists who took part in the auction were so lovely and made the process so much easier for me by posting their items off quickly.  It is so wonderful to know that the world really is full of kind hearted people!

On not such a lovely note the Easter holidays were rather hard for me.  The Sweetpeas seemed intent on trying to send me over the edge :-(  The older Sweetpeas in particular were hard work, I just couldn't leave them alone for 1 second without one of them trying to kill the other one.   Middle Sweetpea turned 11 and we all went out bowling for her birthday so that broke the half term up a bit but even though I tried to keep them busy it still didn't stop them all annoying each other. 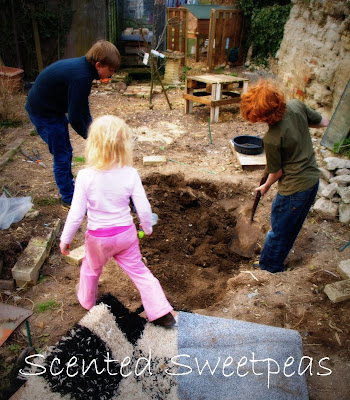 Towards the end of the seconds week I decided maybe getting a friend round may help.  It worked well, Eldest Sweetpea and his friend dug a nature pond whilst Middle Sweetpea played in the house with Little Sweetpea.  It was just what I needed - I really don't think I could have coped with their arguing much longer. 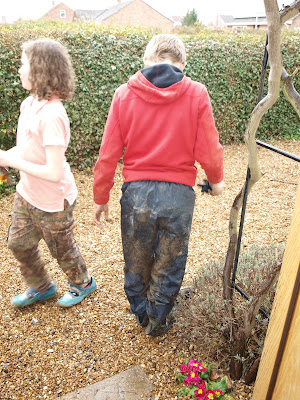 I am not sure my friend was as happy about me having her son round to play ..... luckily she knows me well and sent him in waterproofs. 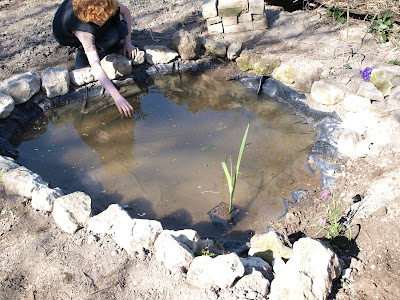 They did a fab job with the pond though and the honey bees are enjoying sipping water from the edges of it and we now have two fish in there too. 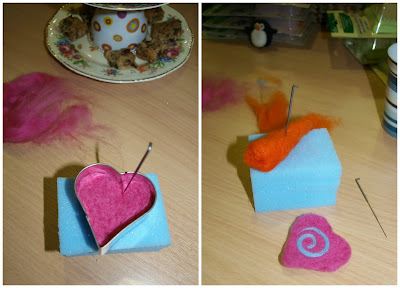 Another saviour for me was a needle felting class that I escaped to one evening in the half term - it was such fun and a real giggle.  I made a heart and was meant to make a carrot but that turned into a fish which I am still creating.  This was held at my friends craft shop and my friend Louise took the class so that made it even more fun.  Notice how the cakes in the first photo have been moved away from me by the second photo - they were very yummy! 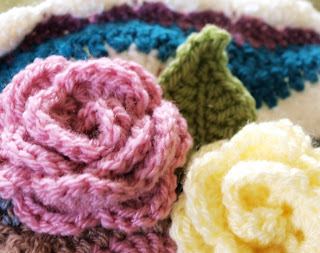 Scented Sweetpeas
Here you will find the ramblings of an arty eco person who enjoys nothing more than crafting and being in her veg patch. I am a mum of 3 children and live in Cambs UK I hope you enjoy your visit to my little blog.

This is a Flickr badge showing public photos and videos from Scentedsweetpeas. Make your own badge here.